I’m nearing the finish line of my seven-week identity development challenge to create three logos and brand identities for three fictitious companies. Last week, I digitized and refined my hand sketches. This week I tweaked a select draft or two and created logo guides for each company. Brand marks don’t exist in a vacuum. They reside in the real world and in every conceivable shape and size. My logos need context.

Modular is the keyword for logos in context. Modular logos are more versatile and can be used in a variety of circumstances from a business card, to a magazine advertisement, to the side of a truck. A modular logo lends itself to removing design elements and constructing different logo versions that can be used in circumstances where the primary logo wouldn’t perform well. This week, I created multiple logo versions of almost every concept to demonstrate modular logo design.

In addition to multiple logo versions, my logo guides provide typography and color used for the brand.

I selected the tricorn hat concept and refined the hat icon and the emblem. The hat was smoothed out, and the size of its crown increased. I capitalized the letters of the emblem and reduced the font-weight.

At a minimum, logos need to be reversible like the example above. Rather than use a regular white, I opted for a cream color that was common during the colonial period. For Tricorn, I also created a secondary logo that’s horizontal and could be used as a brand signature. I added a square version that could be used for social media accounts.

I also explored a blue and cream color scheme that I thought would work well on merchandise. The navy-blue color also fits the colonial brand theme.

For my men’s high-end fashion label, I decided to pursue two concepts from last week. The fedora and the letter N monogram. The fedora version required less work. The graphic needed a minimal amount of smoothing and refining. Similar to Tricorn, I created three logo versions for the concept: a primary, a secondary, and a small. I used a hint of color for the fedora concept, a touch of gray in the ribbon band.

The fedora concept secondary logo, like Tricorn, could be used as a signature. The small logo could be used for clothing tags and social media.

For the N letterform and man concept, I decided to add the letter M to complete the company’s initials, and I disconnected the man from the letters and enlarged him.

For the secondary logo I tried something different. I combined a larger version of the man with a smaller and thinner font. I also added a tagline, which is a common practice for secondary brand marks.

I had the most difficulty with the neighborhood florist. None of the designs from last week passed a review. After abandoning last week’s concepts, I developed two new ideas. Both new concepts incorporate the color purple, which in color symbolism is a balance between the passion associated with red and reason associated with blue. Purple, in addition, is associated with modesty. Both concepts also use a heavy font.

The first concept takes the heavy font and applies a floral pattern to the text. However, the floral pattern looks like a leopard print. Perhaps flower and leaf icons I created for the concept were too large and bold. It could also be that I added too many icons because I included them before I determined that I needed to add a stroke to ensure the logo was readable. I also found this concept to be relative inflexible, which can be a drawback depending on how an organization intends to use its brand mark.

Because I was hesitant about the floral pattern, I took another shot at a simple flower icon. I liked the result more than my previous efforts. I gave the concept a green and purple color scheme and created a quick alternate logo. 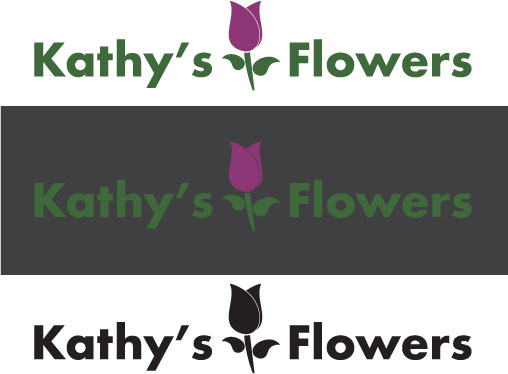 The secondary logo I created for this concept is taller and slightly more compact. It stacks the words “Kathy’s” and “Flowers.”

My artifact for this week is what is called a logo style guide. My next blog post will put a wrap on this logo design challenge. I’ll reflect on troubles, successes, and unforeseen events –thunderstorm knocking off the power. Check back soon for my last installment.