We’re a social species that learns by experiences. Human beings impart wisdom from one generation to the next via stories. Stories are our shared history, education, and the bedrock of civilization. Stories persuade us because they establish empathy and trigger our memory.

Susan Weinschenk, in 100 Things Every Designer Needs to Know About People, writes, “They [stories] invoke empathy, which triggers an emotional reaction. With emotional reactions, people will process data and feelings. Emotions will also trigger memory centers.”

Pictures are the first and most powerful form of stories. We are visual learners. We equate seeing with the truth.  “Seeing is believing.” “I’ll believe it when I see it.” Pictures illustrate events viewers were not present for and facilitate empathy. Pictures allow us to relate, to feel, to have an emotional response.

Pictures (static or moving) are the most persuasive form of communication. Pictures are absorbing and communicate meaning far more efficiently than written words. The well-worn cliché a picture is worth a thousand words is true. “Visuals are processed 60,000 times faster than text by the human brain and 90% of information transmitted to the brain is visual” (Walter & Gioglio, 2014). When we read, pictures form in our heads and the common expression, “paint me a picture,” demonstrates our ingrained reliance on imagery.

It is imperative for communications professionals to include visuals into every piece of communication. There are 94% more total views on content containing compelling images than content with no images (Walter & Gioglio, 2014).

Without further ado, I gathered ten images to examine the stories they tell.

The Birth of Photojournalism 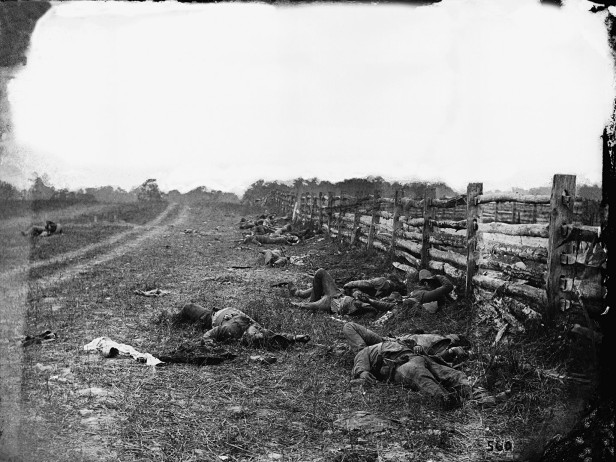 For the first time in history the gruesome reality of war was captured, curtesy of Alexander Gardner’s photos of the dead of Antietam, forever dispelling the romance of war. Gardner arrived with his stereo wet-plate camera two days after the battle and thus photojournalism was born.  His clear photos of the bloated corpses brought war and the battlefield to the masses. 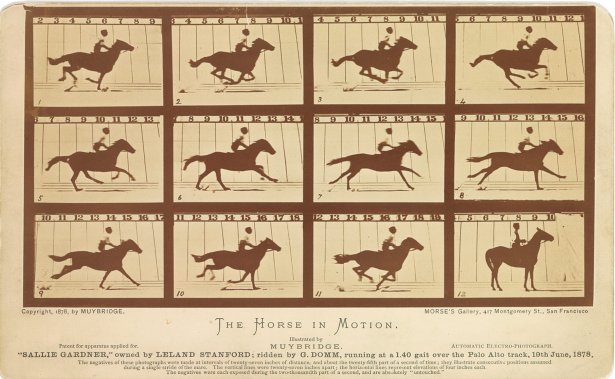 In 1878, Eadweard Muybridge was commissioned to put to rest the question of whether a horse becomes airborne when it gallops. He was able to definitively prove that a horse does leave the ground when galloping. To pull off the feat before witnesses, Muybridge needed a track and 12 cameras. Muybridge’s technique is considered an important precursor to film. The series of images tells the authentic story of how a horse gallops and put to bed a debate. Even today the individual stills remain impressive action shots that display the grace of a horse in motion. 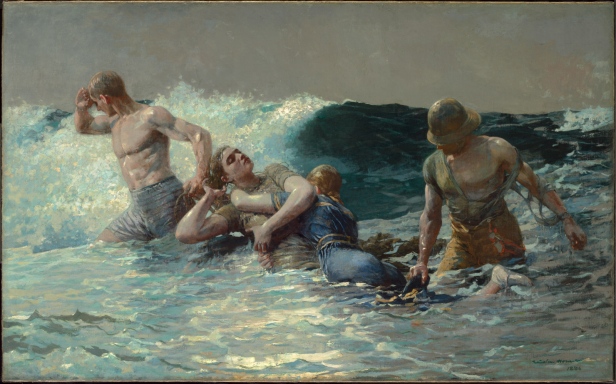 In Atlantic City, Homer witnessed two women rescued from dangerous surf. His painting Undertow recreates the event. The oil painting captures the storm. It has an ominous sky and rough waves. The two women look to be barely conscious and waterlogged. The two rescuers also show the roughness of the weather. The man on the left struggles to see the shore and the man on the right’s clothing is in shambles. I love the depth of the painting—I feel soaked just looking at it.

The Flight of an Alchemist 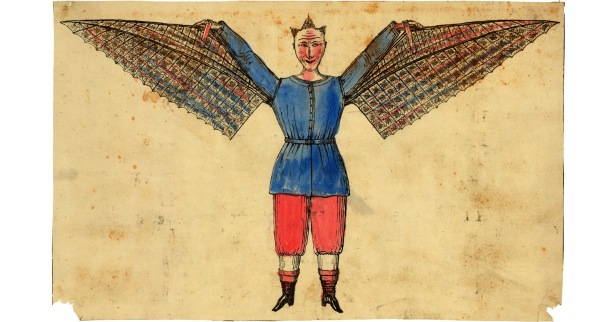 John Damian was an alchemist in the Court of King James IV of Scotland. He was known as the “French Leech.” He was initially interested in changing base metals into gold. As his nickname suggests, many thought him little more than a charlatan. One of Damian’s fancies was to fly. He was sure if outfitted with two large wings made with eagle feathers, he would be able to soar like a bird. Damian did take flight off the wall of a castle (approximately 70 feet) and was fortunate to survive the crash landing with only a broken leg.

This contemporary illustration shows Damian with a foolish look on his face wearing his wings. It also shows how the wings were strapped to his hands showing how he could flap them. after looking at the image, any discerning person would be skeptical of its likelihood of success.

A Slice of Family History 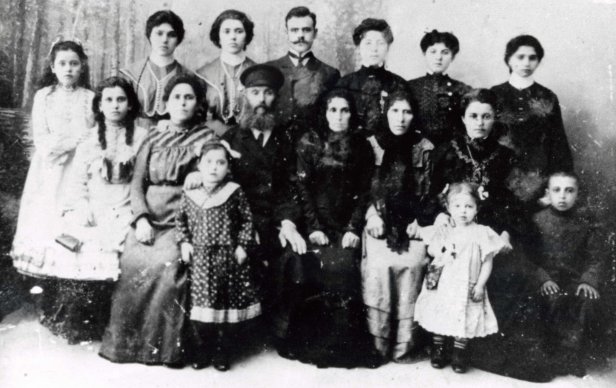 This next image comes from my family. It tells the tale of a family in the first decade of the twentieth century. Half of this family is going to embark on a journey to the New World, America. The rest of the family will remain in imperial Russia (The Ukraine). The image captures an entire family, four generations, and it was taken shortly before part of the family immigrated to the United States. It’s a common relatable American experience story. The man in the center with impressive facial hair was my great-great-grandfather. My great grandmother is the girl on the far left. 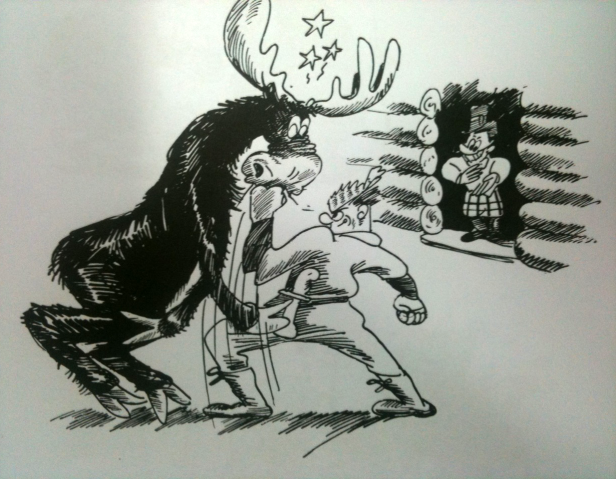 Milt Gross’s wordless satirical novel is considered by some to be the first graphic novel. This image is typical of Gross’s style that can be best described as “frenetic” and action packet. The lines depict motion, and the stars show that the hero has gotten the best of the moose.  He has triumphed over nature. Our hero, with his coon tail hat, is a satire of the archetypal American hero. He is an undaunted man of action. 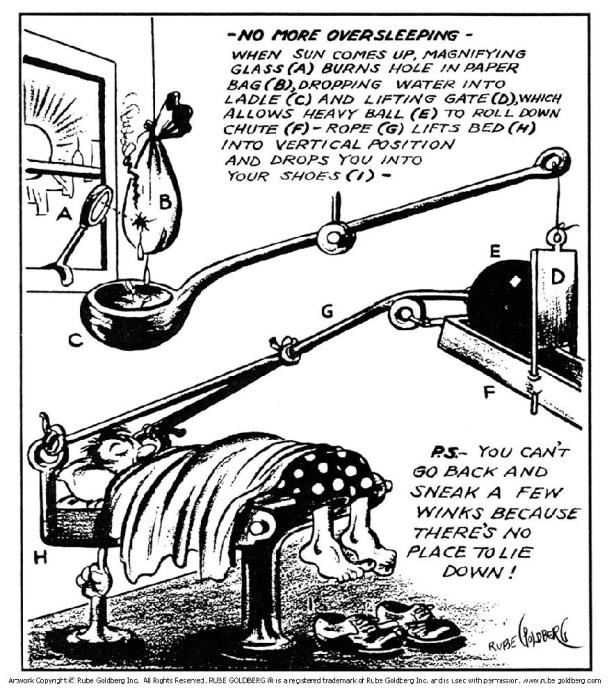 Perhaps no one has drawn more creative contraptions than cartoonist Rube Goldberg. This example illustrates a whimsical contraption that will ensure that this man doesn’t oversleep. Each step is assigned a letter that guides readers through what will happen when the sun burns a hole in the paper bag. The sequence ends with the sleeping man forcefully sprung into his shoes. This cartoon is more effective as a single panel because it allows readers to fill out the sequence in their minds. 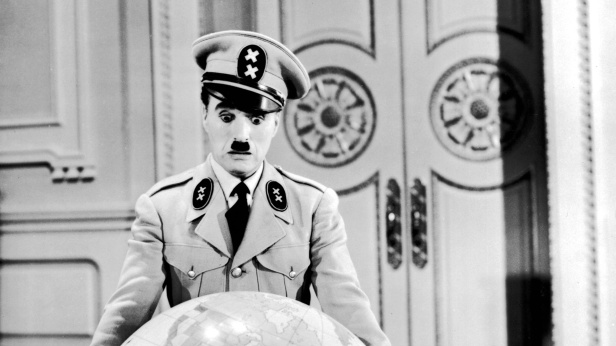 Charlie Chaplin’s first talkie is a great example of the power of satire. Chaplin mocks the absurdity of Nazi Germany and its ambition. This still introduces the iconic scene where Chaplin dances around with the globe. This still shows a wide-eyed Adenoid Hynkel staring at the globe. It highlights his obsession with world domination. The party mark on his hat is a further clue to the behavior of the ruler and his political party, two crosses – the double-cross. He will double-cross anyone to get his way.

The Master from My Hometown 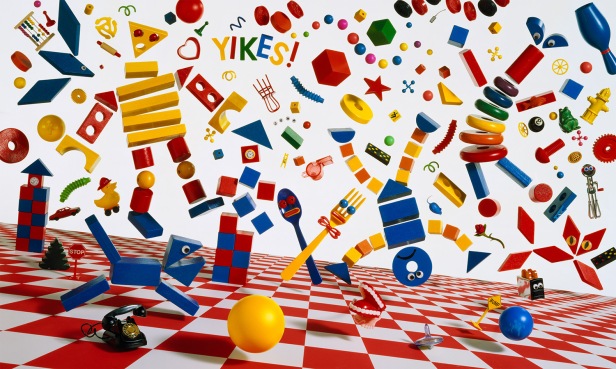 Hartford’s own, Walter Wick, the photographer behind the I SPY series went to the same elementary school that I did. He returned when I was at the school to give us a presentation on how he created his photos for I SPY.

This picture called “Yikes” tells the story of the toy board that has been upended. All of the figures are falling apart and look shocked. The entire image has a feeling of surprise, and motion like someone shook a toy board.

Destruction of the Amazon Rainforest 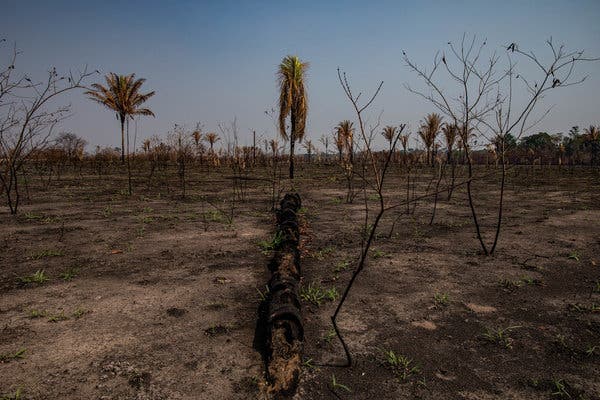 The photo by Victor Moriyama captures the aftermath of the fires ravaging the Amazon. This photo artfully tells a story of utter destruction. We see a vast landscape burnt and barren.  The center of the image has a burnt log that directs our eyes to one of the remaining trees. The image makes it feel like there is just a solitary tree remaining in this area of the forest, which highlight the devastation of the fires.

Walter, E., & Gioglio, J. (2014). The power of visual storytelling: How to use visuals, videos, and socail media to market your brand (1st ed.) McGraw-Hill Education.

One thought on “Picture, a Story”